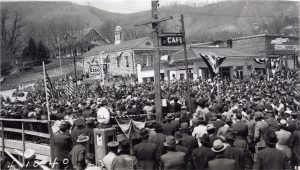 Built between 1938 and 1939, the United States Post Office in Boone, NC, is an outstanding example of the one-story, Colonial Revival-style, New Deal-era post office facilities constructed by the federal government in hundreds of small and medium-sized towns between 1933 and 1940. Completed in late July 1939 (Watauga Democrat, July 20, 1939), the building was designed by Louis A. Simon (1867-1958), the Supervising Architect of the US Treasury, and was funded through the Works Progress Administration. Built using a dressed ashlar stone façade, Boone’s post office was probably a slight variation on a standard Treasury Department design for post offices of this era, modified to account for the unusually spacious project site and the use of local stone materials in its façade.

The 1939 Post Office was one of numerous WPA projects in Watauga County during the late 1930s. Other projects included the African-American Consolidated School in the Junaluska neighborhood, the Mabel Grade School, the Bethel High School, portions of the Blue Ridge Parkway, and dozens of farm-to-market roads throughout the county. Projects in Boone included the Watauga County Hospital (now Founders Hall) in 1936, Appalachian High School (now Chapell Wilson Hall) in 1937, Cove Creek School in 1938, the old Watauga County Office Building (now the Courthouse Annex) in 1938, the Watauga Handicrafts cabin on Blowing Rock Road in 1938, and Smith-Wright Hall in 1939. 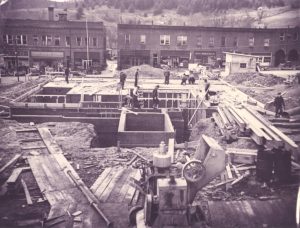 The 1939 post office is located on the site of the James W. Councill House, from which local Confederate Home guard troops opened fire on Union soldiers associated with Stoneman’s Raid as they entered the Town of Boone on March 28, 1865. That house was demolished later in the nineteenth century and replaced by the home of J. D. “Crack” Councill, James W. Councill’s son, which stood here into the mid-1930s. The hill on which the Councill house sat was much higher than the elevation where the Post Office now stands, similar to the height of the Linney House hill to the west. During construction, more than 500 yards of dirt had to be hauled away to make the site work, necessitating donations from the community to pay for the excess excavations.

After purchasing the land from J. D. “Crack” Councill’s widow, Emma Winkler Councill, and leveling the land, the federal government employed local stonemasons Leslie (1900-1957), Clarence (1903-1981), and Earl Lyons (1912-1984) to complete the exterior stonework. Willard Watson, famous for his handmade, wooden toys, allegedly completed some of the carpentry. Dedication of the building occurred on April 10, 1940 (Watauga Democrat, April 11, 1940). A crowd of 3,000 attended—an impressive number, given that Boone’s population was about 2,500 at the time. 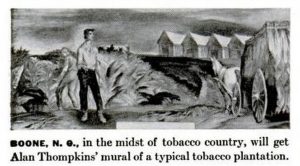 One of the most impressive aspects of this building is that many of the interior features of the first floor’s postal service design remain intact. Perhaps the most famous—and controversial—element of the lobby is the presence of a massive, oil-on-canvas mural that measures eleven feet wide by four feet tall. A Connecticut painter, Alan Tompkins, won a national contest in 1939 to paint the WPA-funded mural in North Carolina—the only mural in the state funded that year. But when Tompkins’s painting appeared in Life magazine along with the other winners, local residents nearly lost their minds. The Watauga Democrat, for example, complained about the “so-called painting which portrays a couple of hungry-looking tobacco growers in a ‘low-land’ field” and concluded that “as far as the artistic imagination goes, the thing stinks.” Boone Postmaster Wiley Hartzog expressed concern to the Treasury Department’s Section of Fine Arts that the image of a tobacco field had little to do with Boone’s mountainous region and culture. Tompkins agreed to paint a replacement in 1940, this time depicting Daniel Boone in a broad-brimmed hat, rather than his customary coon skin cap, leading two hunting companions on a hunting trip through western North Carolina. But Tompkins got in one last dig at locals in the press, noting, “History tells us that [Boone] hated the coonskin cap in which he is so often depicted, and never wore one.” One of dozens of such New Deal post office murals painted in North Carolina, this mural is the only surviving one found in the northwestern part of the state. The mural was fully restored in 2015. Other original and intact details of the interior include the postmaster’s office (accessed through a door beneath the mural); the original service counters, security cages, and signage; wood-framed bulletin boards near the postmaster’s office; the post office safe; a bank of post office boxes at the west end of the lobby; the postal patron service tables; the brass ceiling fixtures; the wainscoting of Tennessee Tavernelle Clair marble; and the terrazzo floor designed to match the wainscoting. 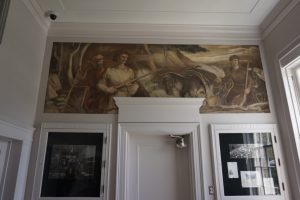 The building was listed in the National Register of Historic Places in 1996 and remains an operational post office, although the Town of Boone—which bought the property in 2009—also maintains offices in the building. The Town of Boone completed a meticulous restoration in 2012 and officially declared the Boone Post Office a Local Historic Landmark in 2016.

[1] Portions of this text are taken from A Brief History of the United States Post Office, Boone, NC, authored by Eric Plaag in 2013, as well as the forthcoming Downtown Boone Historic Resources Survey Report written by Eric Plaag.