Dr. Jones did have a one-story, wood-frame building constructed on this corner in 1914, about where the east portion of DiSanti, Watson, Capua, Wilson, and Garrett’s offices are now located, but this frame building was demolished in 1922 to make way for construction of two new buildings—the Boone Garage (where the east part of DiSanti is located) and the J. Walter Jones Building (where the west part of Mast is located). Construction of the Jones Block was completed in December 1922, probably by the same contractor—Poe and Triplett of Lenoir—who built the Boone Drug Store building directly across the street and the Qualls Block a little to the east on the other side of West King Street. The key architectural feature connecting these three buildings is the central entrance leading to the second floor apartments, flanked on either side by pilasters intended to highlight this entrance and separate it from the storefronts located on either side. This feature was repeated in all three buildings, although it is now hidden on the Boone Drug Building and difficult to make out on the Qualls Block. It’s even harder to decipher here, on the Jones Building, because the central staircase was converted to a window, probably in 1943 when Guy Hunt completed renovations on the building.

Detail crop from image of the 1963 Wagon Train passing through Boone. Image courtesy of the Historic Boone Collection, Digital Watauga.

Other defining architectural features of the building that still survive include red brick generally in a running bond pattern with occasional, irregularly spaced courses of Flemish bond; large pilasters at the outer edges of the façade combined with those framing the second-story entrance space at the center of the façade to create the appearance of recessed panels on the upper portion of the façade; triple-tier corbelling at the upper edge of these panels, immediately above which is a spanning, sawtooth brick course; spanning soldier course lintels and rowlock sills within the panels that are not interrupted according to window positioning; and large, clerestory windows of leaded glass with hinged transom openings and an ornate swirl pattern border over each of the storefronts. That many of these features survive is somewhat surprising, given that Guy Hunt stuccoed the entire south elevation in 1943—a treatment that remained in place until sometime in the 1990s.

The first tenants of the Jones Block were the People’s Bank and Trust Company, located to the east side of the first floor of the Jones building, and the J. M. Moretz Furniture Company, which occupied the west side. Second floor tenants included the telephone exchange for the Watauga Telephone Company, the offices of John Lineback, a lumber merchant, and Dr. W. J. Miller’s dentist office. If there’s anything that defines the history of the Jones Building, though, it’s the steady procession of tenants in the early years, many of which moved on to occupy the spaces with which they are more frequently associated. Boone Clothing Company, Harris Brothers Department Store, and the Lillian Mae Beauty Shoppe were all early tenants who moved on to other places in town in relatively short order. Spainhour-Sydnor Dry Goods Company, more famously known as Spainhour’s, was here in 1925 before moving to the brand new Horton Building across the street in 1929. The Belk-White Department Store occupied both storerooms on the first floor in 1935 before moving across the street to a brand new  building—where the antique mall is now—in 1937. Others that stayed briefly before moving on were Bare’s Fair Store, the Dacus Radio Shop, the Quality Shoe Shop, Paul Weston’s Boone Photo Shop (which also ran an RCA recording studio in 1940), and McGuire’s Beauty Salon. Consistency finally settled in when Guy Hunt took over the entire building in 1943, operating as Hunt’s Department Store. Contrary to popular belief, Hunt’s didn’t occupy the W. R. Winkler Building to the east during the bulk of its tenancy. 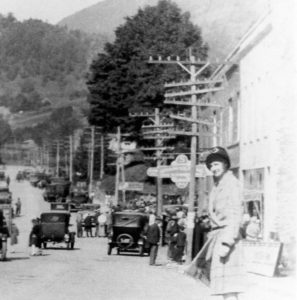 Instead, the W. R. Winkler Building was built in 1927 on a portion of Dr. Jones’s old land, necessitating removal of one of the large sugar trees planted by Colonel George N. Folk during the Civil War. Several others still survive on the Jones House lawn to the east. McGhee Brothers, a frequent contractor on projects in Boone during the 1920s, constructed the Winkler Building, which was initially intended to serve as a garage and showroom for Winkler’s new auto dealership. Winkler changed his mind late in construction and instead leased the building to the J. B. Dick and Company Five and Dime, with apartments on the second floor. Like the Jones Building to the west, the Winkler Building struggled to keep its tenants for long. Two other five and dimes—the Johnson-Stuart Company and the W. W. Mac Company—occupied the storefront before 1939, leading to the “Dime Store Building” moniker sometimes attached to the property. In the 1940s, the building was home to Colvard Auto Parts followed by the Blue Ridge Supply Company, both of which moved to other locations in town after short stays here. The International Resistance Company used the building as a training facility before Craven Furniture, Centre Furniture, and Keplar’s Soda Shop occupied it in succession during the 1950s. Other tenants included the Boone Loan and Gun Shop and Mountaineer Town and Campus during the 1960s. One noteworthy change in the Winkler Building’s appearance is that the original storefront configuration included two store entrances with angled shop windows flanking the recessed shop doors. Throughout most of the building’s history, these two storefronts typically served a single tenant, although the west storefront probably also provided access to the second floor apartments. This practice appears to have changed late in the building’s history. When Guy Hunt finally sold the building to Mast General Store in 1987, the west storefront was occupied by a beauty salon, while Hunt’s Department Store had an annex in the east portion of the building, apparently accessed from the Jones Block by a passageway running behind the beauty salon space. Mast General removed the partition between the two shops and altered this two-storefront configuration sometime after 2002, compressing the first floor configuration into a single entrance.

Clad in running bond, yellow brick, the W. R. Winkler Building retains a number of other key architectural features, including a quadruple-tier corbel band with its bottom three courses of stretchers and a top course of headers; a basketweave band of two soldiers alternating with three stacked headers; second floor windows that retain their soldier course lintels; a soldier course band dividing the first and second floors; and a spanning clerestory window over the storefront, although the original glass appears to have been replaced. 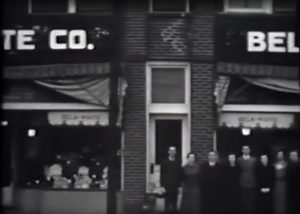 Both buildings have a history of fires. A 1939 fire destroyed much of the second story of the Jones Block and heavily damaged Bare’s Fair Store downstairs. A small fire in 1940 in the W. W. Mac store in the Winkler Building caused minor damage. Recent renovations uncovered evidence of a much more substantial fire in the Winkler Building, but details of that fire are not known.